Lucky and Pons top FIA standings as 2019 Champions are Decided

Italian veteran ‘Lucky’ and his hugely experienced co-driver Fabrizia Pons were top scorers on the 53rd Mecsek Rallye in Hungary to finish the season as Category 4 champions in the FIA European Historic Sporting Rally Championship.

In a dramatic final round for the pan-European FIA-sanctioned special stage rally championship, their Lancia Delta Integrale moved back to the head of Category 4 (pre ’92) as former leaders Will Graham and Michael Johnston retired their BMW M3 mid-rally with alternator problems. ‘Lucky’ emerged as the only category champion not using a Porsche 911.

The closed roads event in Hungary was the culmination of a nine-round season that included a gravel rally in Finland, asphalt events in Italy, Spain, Austria, the Czech Republic and the most high profile of all, the Ypres Historic Rally in Belgium in late June.  In keeping with the FIA’s designated cut-off for historic cars, the competition is open to cars from right up to 1991, which means that four-wheel drive turbo cars are eligible. Given the wide spread of technology, cars are split into four age-based categories to ensure fair competition and four category champions are declared rather than one overall champion. In all, 40 crews scored points in the championship.

Pons, once co-driver to Michèle Mouton in factory teams in the World Rally Championship, said, “It has been a very difficult championship for us but in the last race we won, so we are very pleased.  It was a difficult rally for sure, especially the stages following the modern cars, the conditions were unbelievable.  But we are champions and we will celebrate this with our team.”

The Italian crew finished 43 seconds ahead of the Category 3 (pre’82) Porsche 911SC of Karl Wagner and Gerda Zauner at the end of the 12th and final asphalt special stage, leaving the Austrians to win the Category 3 title for the second time in a row. 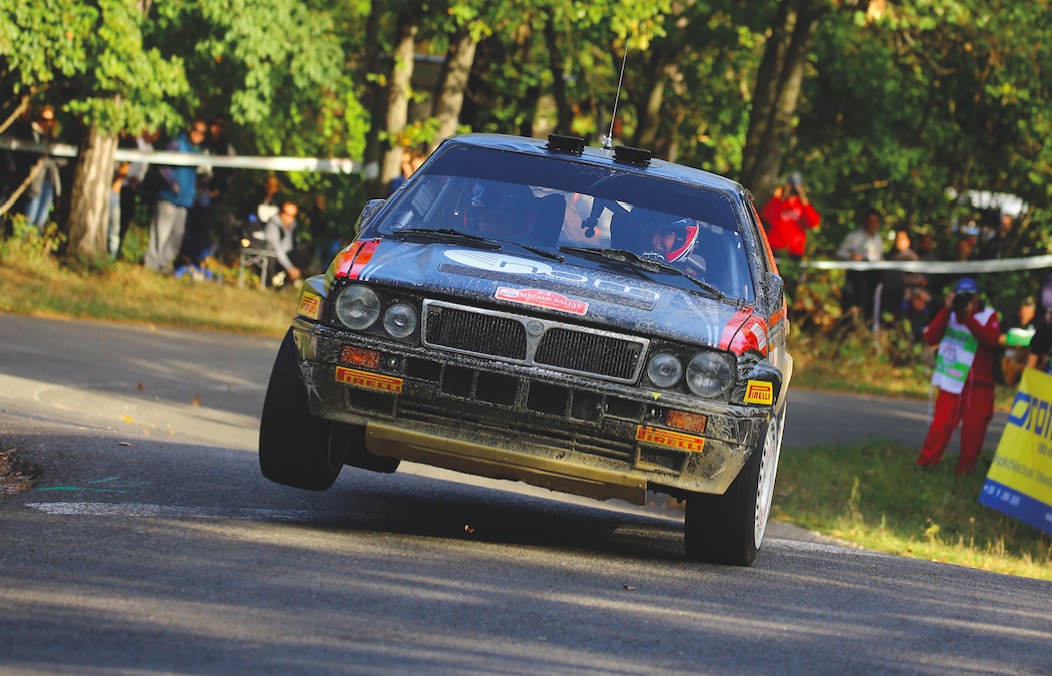 “On the first day it was very hard for us because on the first stage we hit the chicane. We were going a little bit too fast and the brakes didn’t work like I thought and from then on I was a little bit scared about this,” said Wagner. “But we then got faster and faster. The highlight of the season was definitely to win here.”

The Category 2 (pre ’76) title went to Swedes Anders and Ingrid Johnsen in their Porsche 911 with a fine fourth place overall in Hungary, well ahead of the Alfa Romeo 1750 GTAm of Hungarian crew Laszlo and Edit Mekler and the Toyota Starlet of Finns Esa Peltonen and Jyrki Saarto.

“We were very fortunate this time, it is rallying, anything can happen,” said Anders Johnsen. “I like this rally very much.  I like it when the conditions are different from stage to stage, it is a challenge to find a set up that works for the whole rally.  I think the balance in the EHSRC calendar is very good now, I mean the balance between the different types of rallies.  We are happy to win the category in the championship.”

Category 1 (pre ’70) victory on the Mecsek Rally went to the Ford Escort MK1 twin-cam of British crew Ernie Graham and Tim Sayer.  This was Graham’s third victory of the 2019 season and he finished just two points behind category champion Antonio Parisi, who, with co-driver Giuseppe D’Angelo, secured the title ahead of the final event in Hungary, the pair’s fourth consecutive Category 1 championship win.  After clinching the category on the penultimate event, the Italians did not make the trip to Hungary with their Porsche 911S.