The 18th running of the HSCC Oulton Park Gold Cup took place at the Cheshire circuit with 21 races spread over the sweltering Bank Holiday weekend of 24-26 August.  Since a Historic Gold Cup was introduced in 2016, it has been awarded to the winner of the headline single-seater race, which this year was the two-part XL Aurora series and it was fitting to see a couple of 3-litre F1 cars in the entry, along with representation from F5000 (in the 50th anniversary year of the formula’s debut race at Oulton), Formula 2 and Formula Atlantic. 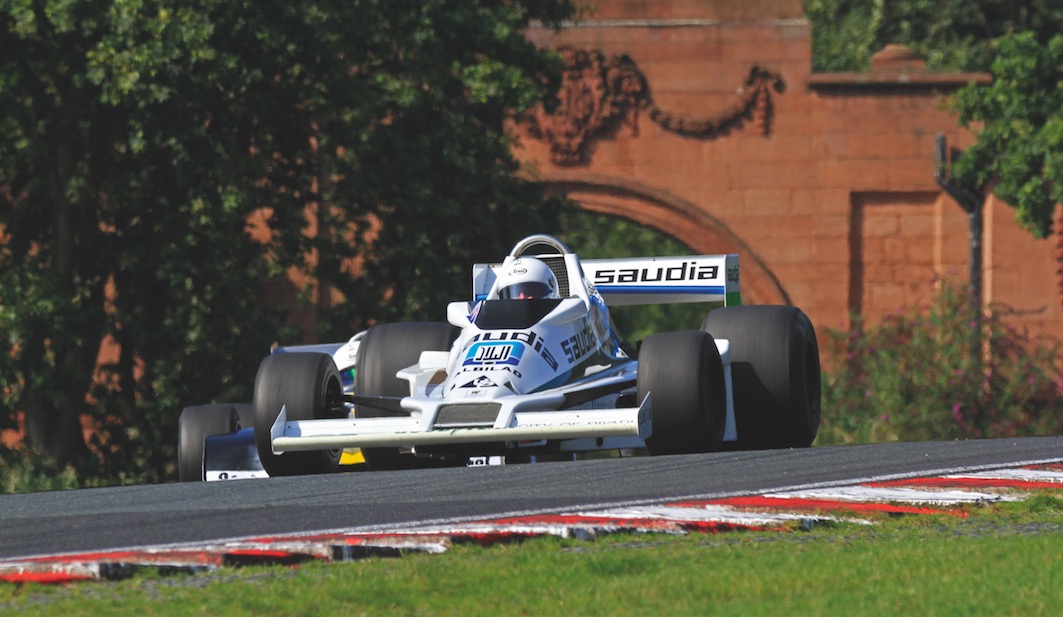 Marty Bullock’s was a popular win, the Australian taking a pukka F1 car to its rightful place on top of the Gold Cup podium.  Photos Charlie Wooding

Jamie Brashaw was a welcome late entry in his March 73A and, in Sunday’s first race, proceeded to lead from pole although he was shadowed closely in the early laps by his sometime teammate, Mark Dwyer, whose March 742 dropped away towards the close.

In theory, the afternoon’s second race should have produced much the same result but Brashaw and Dwyer tangled as they entered Old Hall, bringing out one of the many red flags of the weekend.

Sunday’s racing opened with the first of a Formula Junior double-header for front and rear-engined cars. Pole-winning Peter de la Roche took the initial lead in his front-engined Lola Mk2 from Andrew Hayden’s newly-acquired ex-Mike Spence Lotus 22, until his driveshaft failed, leaving Hayden to take his first FJ victory.  Michael Hibberd took the front-engined class in second with his Lola Mk2, a whisker ahead of Alex Morton’s Condor. 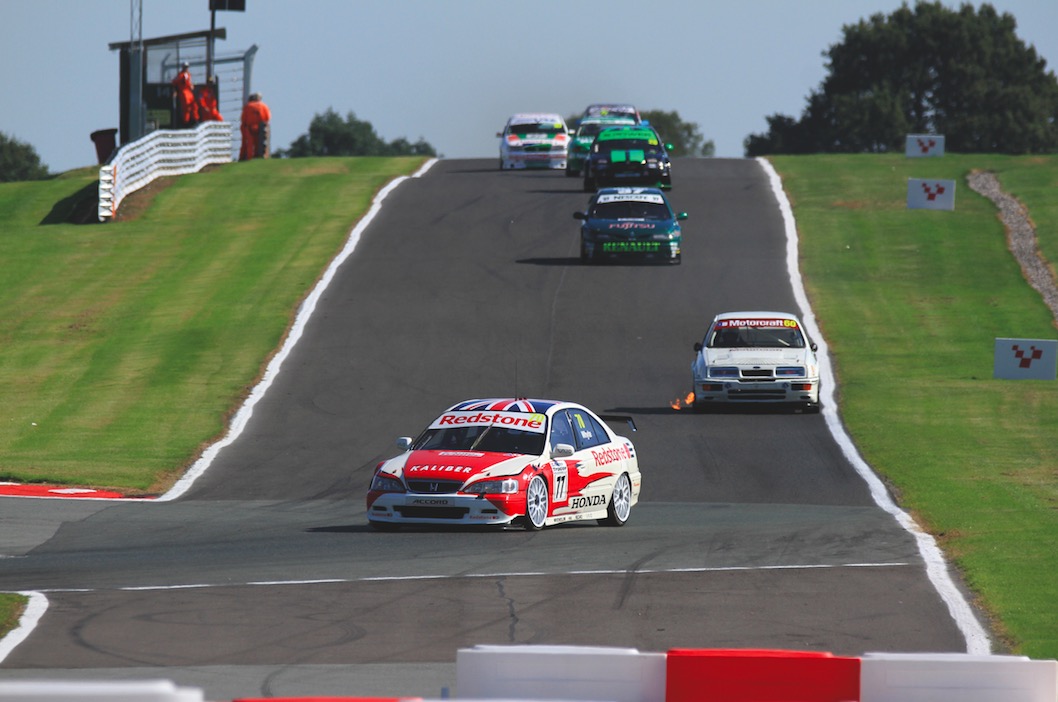 Once again, Flying Scotsman Stewart Whyte was uncatchable in both Dunlop Saloon Car Cup races in his ex-Kristensen Honda Accord Supertourer

With driveshaft restored, de la Roche joined the battle with Robin Longdon (Lola Mk5A) and Hayden in the second race, and after Longdon held the early lead, de la Roche was past by mid-race, only to be demoted three laps later, the lead trio scrapping to the line with only 0.9 s covering them.

From pole position, Andrew Hibberd was surprised and swamped by the second row at the start of the first Historic Formula 3 race with occasional Oulton visitor, Enrico Spaggiari, leading the first lap in his unique GLTL Lotus 41X from Swiss Christoph Widmer’s BT18A. Normal service was resumed by lap 2 with Hibberd taking the ex-Irwin Chequered Flag Brabham BT18 into the lead that he continued to extend over Spaggiari, lapping two seconds quicker than the nearest opposition.  Andy Jarvis’ March 703 and Peter Thompson (Brabham BT21) fought hard over third place after Widmer dropped back to fifth.  Hibberd was unchallenged in part two, but the battle for second enlivened proceedings, between Widmer, Jarvis and Thompson, and joined by Simon Armer (March 703) before he departed the scene at Hislops with a flat battery on lap 6.  The remaining trio crossed the finish line abreast, 0.1s separating them, with Widmer just getting the verdict in his 100th race outing. 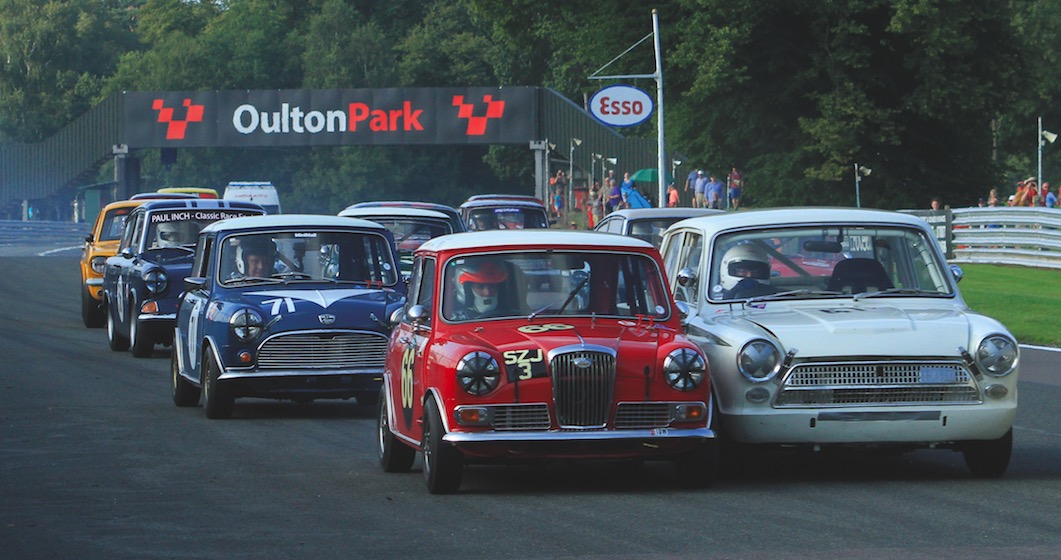 Both Kevin Kivlochan, in his Morgan Plus 8, and Will Leverett’s Martini-liveried Lotus Europa led the 70s Road Sports encounter only to retire one after the other.  This left Jim Dean’s green Europa with a lead that he held to the finish, in spite of an early challenge from series veteran Charles Barter (Datsun 240Z).  Jason Minshaw, running in the invitation class with Nigel Parry’s Ford Escort RS2000, displaced the Datsun in the closing laps but was forced back to third after a moment.

After his disappointment with the Morgan, Kivlochan took his fabulous AC Cobra to another Historic Road Sports victory, although he was pressed hard and kept on his toes all the way by Will Plant’s Morgan Plus 8, while the grid for Classic Formula 3 was bolstered by a non-championship class for URS Formula Ford 2000 and, from pole in both races, Andy Smith took a brace of straightforward wins with his March 783.

Flying Scotsman Stewart Whyte was uncatchable in both Dunlop Saloon Car Cup races, his ex-Kristensen Honda Accord Supertourer (a winner at Oulton in 2000 with the Dane) pacing away from the chasers in race one, the pursuit headed first by Mark Wright’s RS500 Sierra and then, after starting from the pit-lane, Ric Wood’s Walkinshaw-built Holden Commodore.

The Guards Trophy saw Dan Eagling cheekily snatch an early lead in his Ginetta G4 from Charlie Allison (Chevron B8), closely followed by the dicing Lotus 23s of Croft victor Benn Tilley and Peter de la Roche.  Tilley was first of the leaders to pit and found himself in the lead once the round of stops was completed, resisting all of Allison’s challenges, until a late safety car deployment caused the field to regroup.   Once released, with only one lap remaining, Allison sneaked through to pip the young Lotus driver to the line by 0.166secs.

Callum Grant returned to his Bolton base after his FF2000 Delta failed on Sunday and returned with his familiar Merlyn Mk20 to contest Monday’s Historic Formula Ford races.  The trip proved worthwhile as he took a double win. 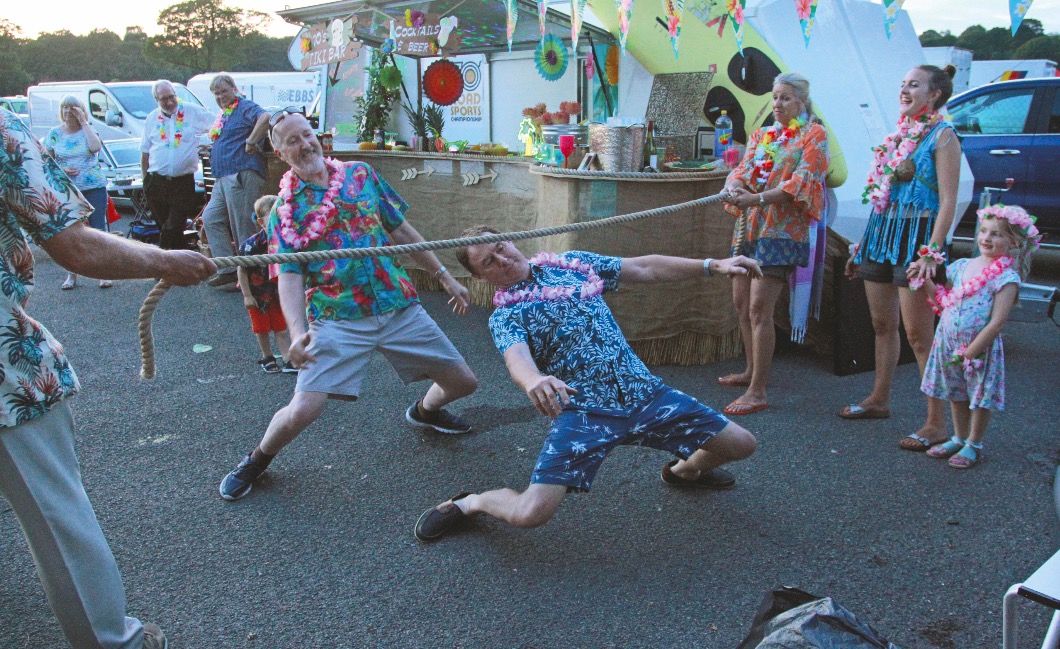 Peter Hallford marked his return to racing after a brief lay-off by taking the opening race for Historic Touring Cars with his Ford Mustang after early challenges from the Lotus Cortinas of Richard Belcher and Roger Stanford.  Hallford became bogged down at the start of the second heat but then the race was red-flagged.  From the restart he latched onto the tail of Stanford’s Cortina before passing and heading for a relatively comfortable victory.

Classic Clubmans proved to be yet another Mark Charteris-fest, the Mallock Mk20/21 driver taking a double win from Alan Cook (Mallock Mk20/21B) on both occasions.

For a fuller report see out October issue