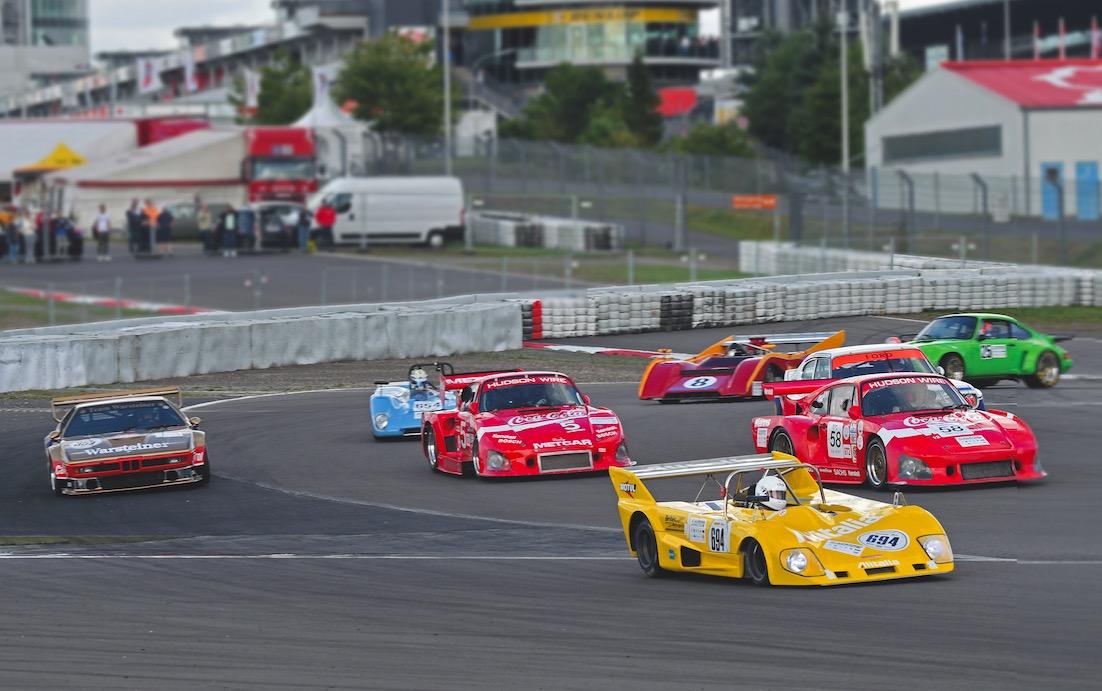 Despite some monsoon weather on the Friday afternoon, the event largely took place in partly sunny, partly overcast conditions.  Porsche, Alfa Romeo and Skoda were once again the brands featuring their stuff and inviting their owners’ clubs to the event, with Porsche especially pulling out all the stops – the Mercedes Arena was filled with more Porkers than ever before.  In a Stuttgart battle for attention the eye was caught by the many AMG banners surrounding the scene... In a vein similar to the Silverstone Classic, many people never wandered beyond the club area, the motor racing acting as a mere sideshow to them.

14 historic Formula 1 cars was not quite the turnout that the organisers had hoped for but at least all the contenders were there.  The presence of Ferrer-Aza, Stretton, Cantillon, Constable, d’Ansembourg and Folch, with Fletcher again taking on Wright in the pre-78 class, meant that despite the lack of quantity, quality wasn’t lacking.

Matteo Ferrer was nursing an ailing engine in his Ligier JS11/15 and had planned for a conservative approach, preserving his championship lead and with a bit of good fortune clinching the title over the weekend. Martin Stretton, meanwhile, was in serious doubt of being part of the final two championship rounds, the owner of his Tyrrell 012 having allowed him more races than in previous years already, and so wanted to go out with a bang. 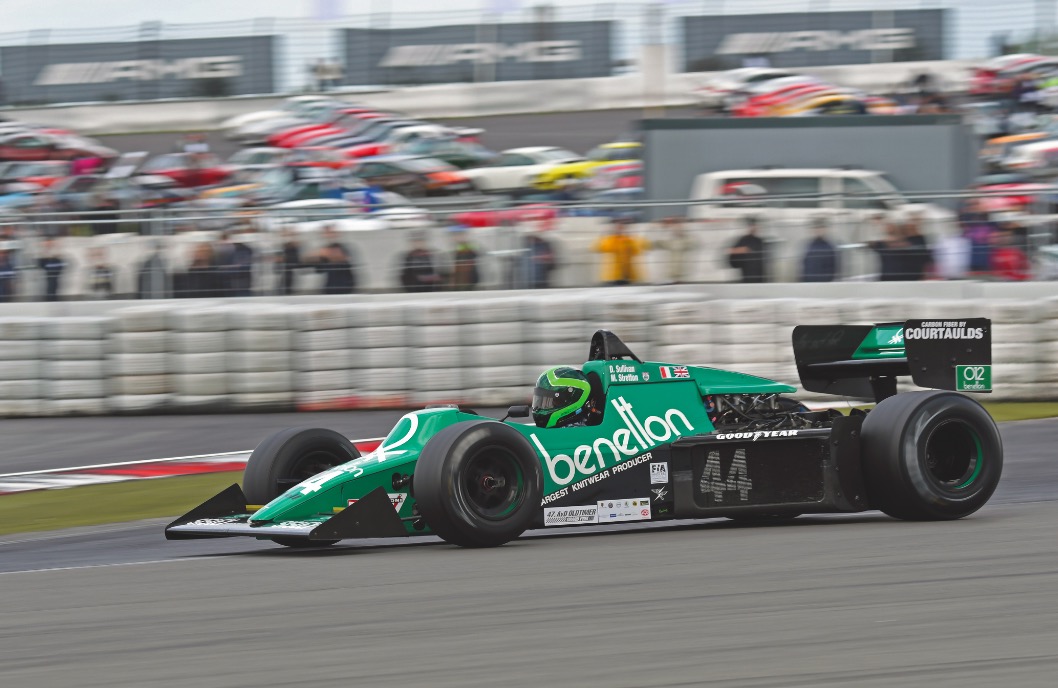 Martin Stretton won both F1 races in a Tyrrell 012

And he did.  With pole and two wins the old fox ticked all the boxes, leading from lights to flag to win the first race, he only saw Cantillon’s Williams FW07C approach towards the end.  He then did all the work from eighth on the reversed grid to hit the front on lap 7 of a frantic second race and complete the double.  Lots went on in his mirrors, culminating in Jamie Constable’s Tyrrell 011 tangling with Jonathan Holtzman’s Lotus 87B, the American valiantly defending a second place gained from his start on the second row.  This promoted a cautious Ferrer into second, a gift he gladly accepted, as it meant that he inched ever closer to the title.  In the pre-78 class, Henry Fletcher stormed to a pair of dominant wins, performing admirably in his March 761 to take third overall on Sunday.  That was enough to seal the pre-78 title.

Two drama-filled HGPCA Grand Prix races had the crowd on their feet, too.  In race one, Michael Gans in the Cooper T79 fought Will Nuthall’s Cooper T53 all the way, the two often running side-by-side.  Peter Horsman (Lotus 18/21) had been the only one to come close to the pair but in the end John Chisholm’s Lotus 18 won the battle for third.  The next day, Nuthall and Gans initially made it a three-way tussle with Horsman before Gans lost touch.  When Nuthall shockingly retired on the final lap, the win was Horsman’s, 14 seconds away from Gans.  From 30th on the grid, Barry Cannell drove a barnstormer to haul his Brabham BT11 all the way up to third at the chequered flag. 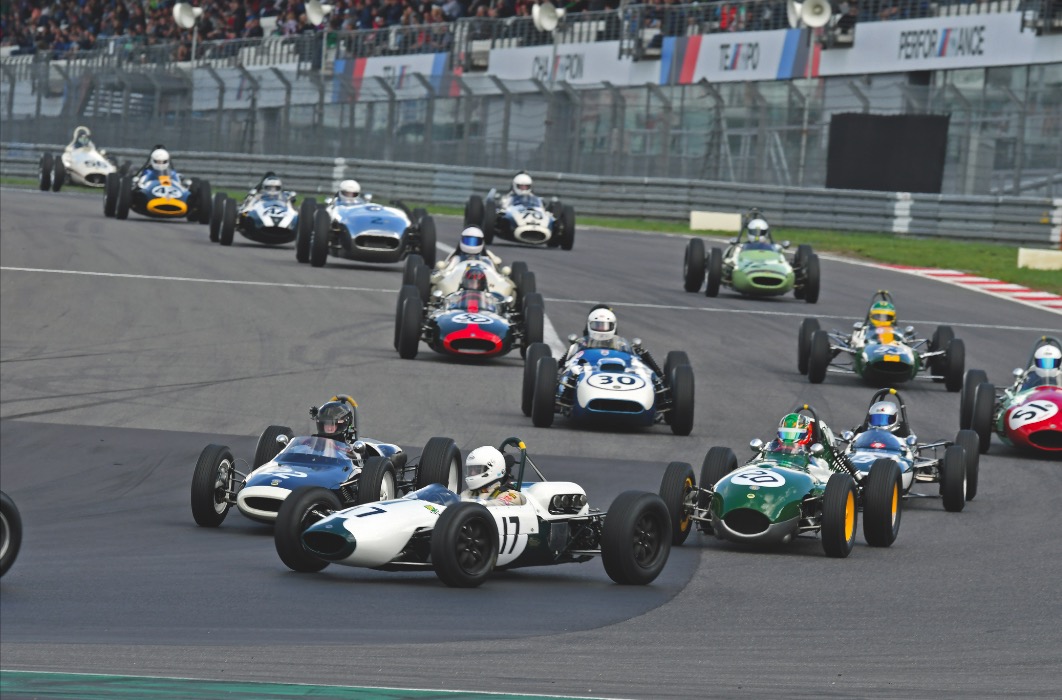 The Formula Junior field of 41 cars, selected from 65 applicants, delivered two FIA Lurani Trophy races in age-old slipstreaming style.  On both occasions, Richard Bradley’s Brabham BT2 led away but failed to finish, handing the initiative to the category’s ‘usual suspects’, Manfredo Rossi and Bruno Weibel in their Lotus 22s.

Sunday’s FIA Masters Historic Sports Car race had two faces – a chaotic stop-and-start first part blighted by two safety cars but also with a fierce five-car fight at the front, and then a second part in which the race settled into a rhythm to allow Andy Wolfe (in the Lola T70 Mk3B started from pole by Jason Wright) to catch and pass Michael Gans’ Lola T290.  Gans was subsequently excluded from the results.

In the pre-66 Hulme class Chris Jolly survived a first-lap scare of a trip through the gravel, puncturing his radiator and throwing fluid all over his visor, to repeat his and Steve Farthing’s Silverstone glory in their Cooper Monaco T61M. 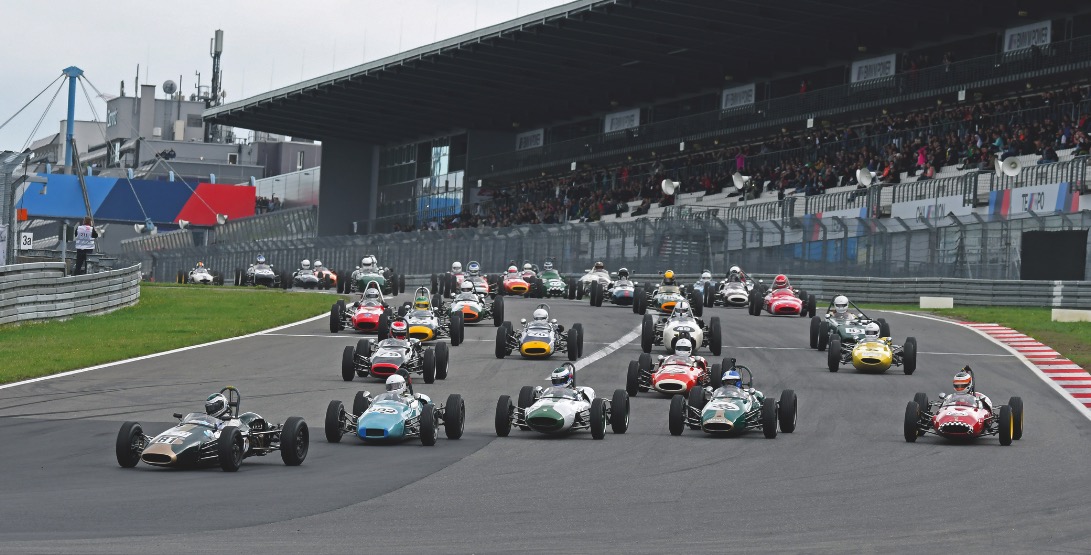 The Formula Junior  eld of 41 cars, selected from 65 applicants, delivered two FIA Lurani Trophy races in age-old slipstreaming style. On both occasions, Richard Bradley’s Brabham BT2 led away but failed to  nish, handing the initiative to the category’s ‘usual suspects’, Manfredo Rossi and Bruno Weibel in their Lotus 22s. On Saturday, the pair soon dropped the BT6s of Piero Tonetti and Mark Shaw, the latter eventually beating Tonetti to third. Rossi again beat Weibel on Sunday, this time by just 0.144secs, but Bradley led until, with three minutes to go, he threw away the win by spinning into the gravel. Tonetti claimed third in a race that saw a huge startline pile-up when Mark Shaw’s borrowed engine,  tted over Saturday night, burst an oil seal, unwittingly causing chaos on the opening lap involving  ve cars, which meant that only nine minutes of racing remained once the track was cleared.

The combined DRM Revival and 100 Meilen Trophy races saw the bewildering combination of ‘70s Group 4 and Group 5 machines mixed with open-top prototypes from the sixties to the eighties.  The result of this madhouse was that on Saturday, Felix Haas (Lola T294) beat Marco Werner’s Trojan-built McLaren M8, and on Sunday, Werner turned the tables on Haas to win by less than a second.

On a repeat from their 2018 debut at the event, the German Ferrari Challenge saw Yannick Trautwein bag two more wins in his Ferrari 458 GT2, making it four out of four from the FCD Series’ two appearances at the Oldtimer Grand Prix.

The Masters Gentlemen Drivers race was all about Julian Thomas and Andy Wolfe (replacing Calum Lockie on the occasion) fending off Nicky Pastorelli’s Ferrari 250 GTO/64 for the whole 90 minutes.  Their Shelby Cobra Daytona Coupé had taken pole by seven thousandths from the similar Voyazides/Hadfield machine, but Voyazides was unable to keep pace with the leading duo, the Greek professing a dislike for the Nürburgring GP circuit.  Hadfield still finished ahead of the local TVR Griffith of Christopher Stahl/Oliver Mathai but it was a distant third.  Nicolaj Kjaergaard looked to have cornered the CLP class win in his Elan, like he did two years ago, but then the young Dane was thrown out because of a non-conforming gearbox.  In another Elan, Rob Fenn and BTCC driver Jake Hill were happy to take the win instead, Fenn having finished the race limping home using third gear only. 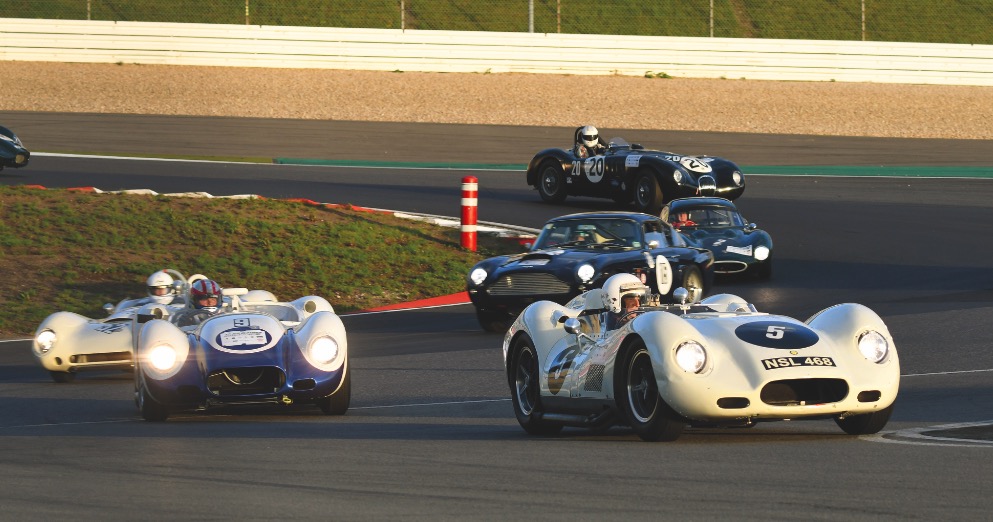