Organised by Malcolm McKay’s ClassicRallyPress organisation, this year’s Liège-Brescia-Liège Rally for Triumph TRs in July saw 26 TRs from 1953 to 1976 take part.  The rally closely followed its original 1958 route but was split over 10 days instead of the original continuous 60hrs with just one 8hr break.  Still formulated as a navigational endurance challenge, with three circuit tests, drivers were offered the possibility to drive the rally as a tour, but none of the TR owners were interested in that option, all battling to find the route controls and win at least a class award, if not win overall.

The route headed over the Belgian Ardennes into Germany and the Dolomites, crossing Austria to Italy then headed east into Slovenia and over the challenging Vrsic pass before dropping down to Ljubljana, where a day’s break allowed competitors to service their cars and visit the city. 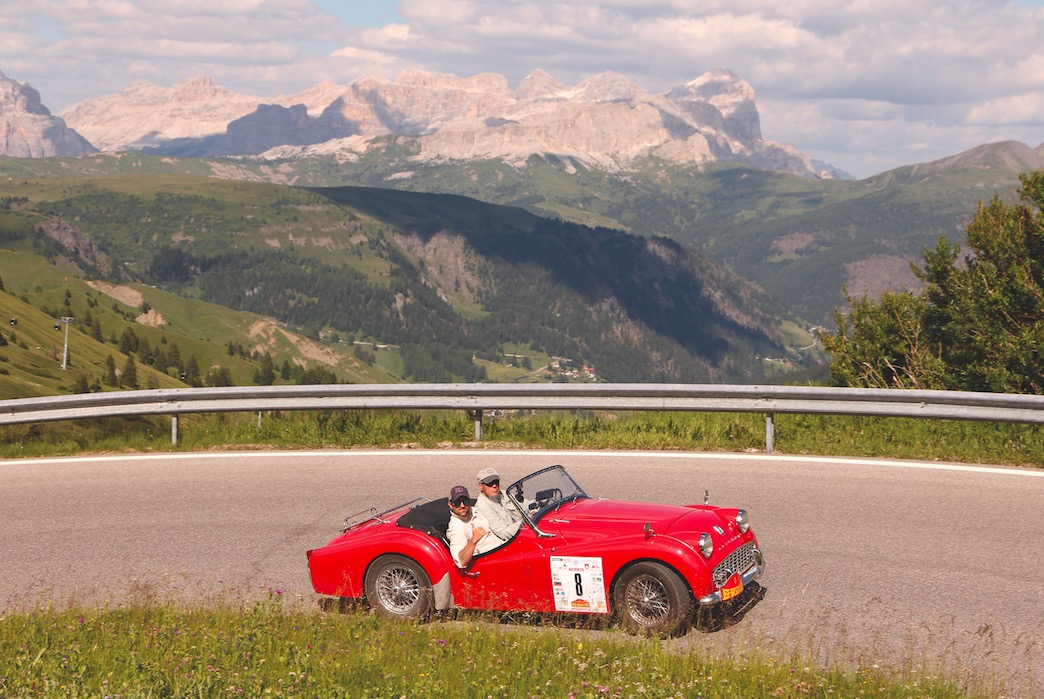 The weather was superb throughout – making the scenery all the more stunning and the roads more enjoyable.

By this stage, some were battling on after repairs, while two had retired.  Vincent Paccellieri, running with his 20-year old son in the oldest car, the first Triumph TR in Europe, which was shown at the 1953 Paris Motor Show, had a catastrophic front hub failure on the first day.  Undaunted, he persuaded a friend to drive from the south of France to Germany with a spare hub, replaced it at the side of the road and caught up with the rally at midnight. The camaraderie on the event was terrific, competitors all helping each other and enjoying the company of fellow TR enthusiasts.

After the break in Ljubljana, competitors enjoyed the Passo di Pordoi, Passo Stelvio and Passo di Gavia.  In 1958 most of the 15 mountain passes would have been gravel, but now all are tarmac, so a 10km gravel road section in Slovenia was added to give competitors a feel for the extra challenges those 1958 crews faced.  Just as then, the rally entered Brescia to a reception in a central Piazza, now accompanied by police motorcycle outriders and, after a glorious return drive through sweeping country roads in Germany and Belgium, it finished at the evocative Abbaye de Stavelot that houses the Spa Circuit Museum.

The event is divided into two categories, Authentic for cars of a type that were around when the original rally was run, and Spirit for later types.  Authentic winners this year were Andy English and John Smallwood, who had battled mechanical issues throughout the event in their TR3A.  They were closely followed by US father-and-son team Jeff and Jeff Givens in a TR3A that Jeff senior has owned for 50 years and driven 390,000 miles, and Iain Paul and James Butler in a gorgeous Apple Green TR3A that was a factory team rally car in the 1950s.

Spirit winners were Liz Wakefield and Mike Jones in their super-reliable TR4A, just one second ahead of Paul and Jan Gerring in a superb replica of the 1960 TRS Le Mans cars – with TR Register Vice Chair and Editor Dave Burgess and Wayne Scott in Dave’s stunning TR6 not far behind.