We have a pretty active Facebook group, the members of which are historic motor sport enthusiasts from all the corners of the world, and I always look forward to reading their posts.  I saw a post by Ian McAlpine that I loved and decided to share it here.  However I then started looking into the personality of its subject and had to add some of what I found in my researches to what Ian originally posted.

The driver Alfonso Antonio Vicente Eduardo Angel Blas Francisco de Borja Cabeza de Vaca Y Leighton, better known as the Marquis de Portago, would have made James Hunt’s exploits seem run of the mill.  He was born in London and, aged 17 flew a light aircraft under Tower Bridge to win a $500 bet, losing his pilot’s licence in the process.  He played a ferocious game of Jai-Alai (Pelota), swam competitively, won a tennis title and took up top-level polo, yachting and shooting.  He was a fearless horseman, winning three successive French amateur titles, rode in the Grand National twice and, in 1956, represented Spain at the winter Olympics in their bobsleigh team coming a creditable fourth.  He also won bronze medals in the two-man event at Cortina d’Ampezzo  and the 1957 FIBT World Championships in St. Moritz.  He competed in many other sports, including the Cresta run, but unlike Hunt, de Portago wasn’t a drinker.  Wealthy, young, tall, dark and handsome, he was an international celebrity, plastered as much across the social columns and tabloid front pages as he was in the sports sections.  He was fluent in four languages.  His Godfather was King Alfonso XIII of Spain.

He won six major races, including the Tour de France, giving the 250 Ferrari its “Tour de France” nickname, the Grand Prix of Oporto, and the Nassau Governor’s Cup (twice).  He participated in five World Championship Formula One Grands Prix, debuting on 1 July 1956.  Enzo Ferrari offered him a works F1 drive  in a Lancia-Ferrari D50A for the French GP at Reims.  His best result was a second place at the 1956 British Grand Prix (in a shared drive with Peter Collins).  In the British GP he was called in to hand over to Peter Collins. In Germany he was again called in, but didn’t object.  “One day someone will be asked to hand over to me”.  Ferrari valued the gentlemanly side of ‘Fon’, “that always managed to emerge from the crude appearance he cultivated”.

Founder of Autosport magazine, Gregor Grant, said of him, “The fellow does everything fabulously well.  Never mind the driving, the steeplechasing, the bobsledding, the athletic side of things, he could be the best bridge player in the world if he cared to try, he could certainly be a great soldier, and I suspect he could be a fine writer.” 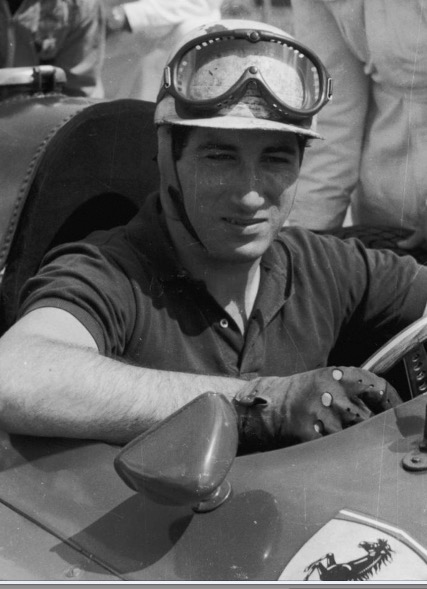 Unsurprisingly, he was precocious when it came to women as well.  At just 20 he married Carroll McDaniel, a former model he barely knew who was several years older than him.  Though they had two children together, he soon divorced her so he could legitimise a Mexican marriage certificate to Dorian Leigh, a fashion model eleven years his senior, with whom he fathered a son. There was also a third lover, the last woman he’d ever kiss. The story goes that Mexican actress Linda Christian, ex-wife of actor Tyrone Power, was waiting for him at the Rome checkpoint of the ill-fated 1957 Mille Miglia.  De Portago stood on the brakes, ran to her, kissed her and carried on.

He was killed when a tyre burst on his Ferrari 335S and the car crashed into the crowd killing 10 spectators, himself, his co-driver and the Mille Miglia.  That was the last time the race was run.  He was 28 years of age.

As one contemporary said of him, “He packed more into his 28 years than most people pack into a much longer lifetime.”

I was always aware of his fame as an international playboy, much of his story as a racing driver and his reputation for bravado, but when I started reading about all his other accomplishments I must admit I became fascinated by his character.  I’ve now discovered that Ed McDonough published a book about him in 2006, now out of print, about which one reviewer said, “It reveals many of the “exaggerated” claims that have been spread since Portago’s death, without doing damage to the reality of his life.”  So do take all of the above with a grain of salt.

Now that’s what I call Sprezzatura.  Steve McQueen eat your heart out.  Thank you, Ian, for your post.  CS