The biggest race meeting for historic cars in Norway is the “Asfalt Classic” at Rudskogen.  Nestling in the forest south of Oslo, the circuit was built in 1990, and rebuilt in 2011 when it was doubled in length to 3.217kms, offering an extremely challenging ride, the elevation changes offering some big slopes.  A few years ago the Norwegians put a major effort into historic racing at Vålerbanen, about two hours north of Oslo, that also included a competition for the Swedish RHK series for a few years.  Unfortunately, the meeting was stopped, but for a couple of years now the Norwegians have been interested in reviving this pan-Scandinavian concept at Rudskogen.  It is not an exact copy of the previous event, but the main focus is on the historic classes.  Drivers from all the Nordic countries were invited on the weekend of August 17-18, as was the sports car series from Sweden.  200 drivers took part in the races.   On Saturday rain poured down all day, but on Sunday the sun was shining.

The historic cars were divided into three groups with each group getting a pair of  sprint races, though many raced in more than one group. The oldest group, for pre-‘66 cars saw Yngvar Ekorness come out on top of a Mini Cooper Podium, with Mads Gjerdrum and André Saethern.  In the second race Gudmund Gulbrandsen in his Ford Falcon and Jan-Hroar Björklund in his Lotus Elan, demoted the Minis.  The next group was for the period 1966-1971.  John A Johansen (Mini 1275 GT) and Atle Ramdal  (Ford Escort 1300 GT) took a win apiece. 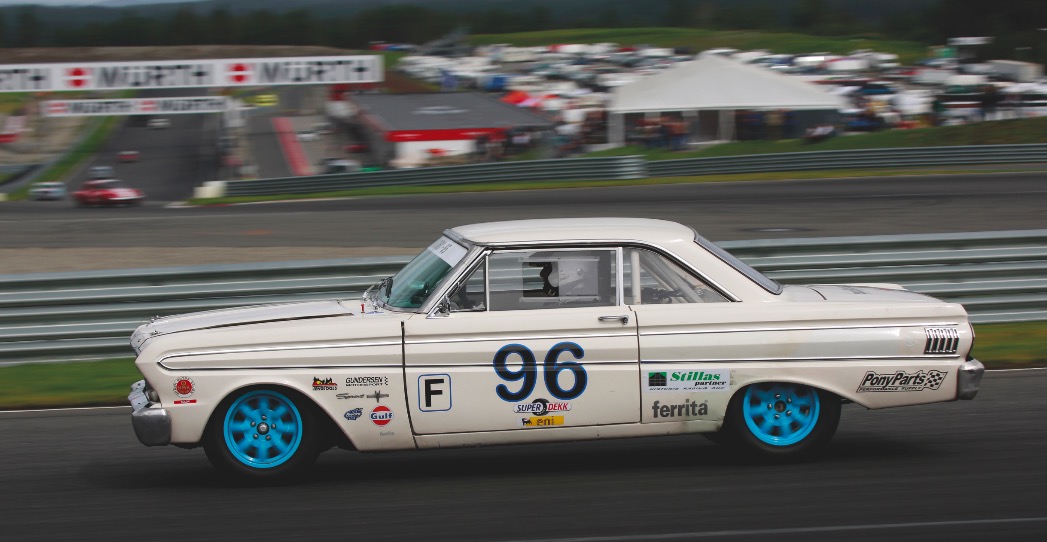 Well known Norwegian racing driver Tommy Rustad - amongst other titles in a long career that included rallycross, touring cars and formula cars, he was Italian F3 champion in 1996, and independent champion in the BTCC in 1998  - was invited to drive a Ford Escort RS 1800 as a gift for his 50th birthday in the races for cars from 1972-1990.  He gladly accepted the challenge and was the quickest in the qualifying, though in the races he struggled against the top series regulars.  He placed third both times behind the Ford Escort RS 1600s of Tor Magne Tjemsland and Mathias Havdal.